The Great Wall of China is the world’s longest wall and biggest ancient architecture. Its winding path over rugged country and steep mountains takes in some great scenery. It has a stunning array of scenery from the beaches of Qinhuangdao, to rugged mountains around Beijing, to a desert corridor between tall mountain ranges. 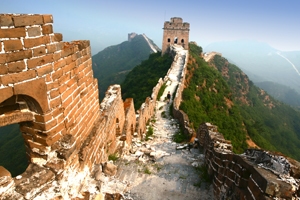 The Great Wall at Simatai

The average height of the Great Wall at Badaling and Juyong Pass is 7.88 meters, and the highest place is 14 meters high. Nearly 1/3 of the Great Wall has disappeared without trace. Since 1644, when the Ming Dynasty was overthrown, no further work has been done on the Great Wall (for military purposes — some has been restored for tourism).  Great Wall reconstruction and protection began with Badaling in 1957.  In December 1987 the Great Wall was placed on the World Heritage List by UNESCO. 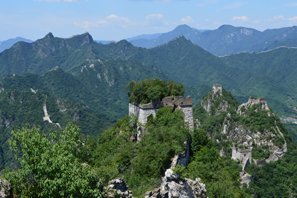 The Great Wall at Jiankou

The Great Wall of China cannot be seen from space by the human eye without aid. The Great Wall is not a continuous line: there are side walls, circular walls, parallel walls, and sections with no wall (high mountains or rivers form a barrier instead). In the Qin Dynasty (221–206 BC), glutinous rice flour was used to bind the Great Wall bricks.  The Great Wall labor force included soldiers, forcibly-recruited peasants, convicts, and POWs.  The First Emperor of Qin was not the first to build the Great Wall. He linked the northern walls of the states he conquered. There most popular Great Wall legend is about Meng Jiangnv, whose husband died building the Wall. Her weeping was so bitter that a section of the Wall collapsed, revealing her husband’s bones so she could bury them. The Gubeikou Section of the Great Wall has bullet holes in it, evidence of the last battle fought at the Great Wall . During the Cultural Revolution (1966–1976), many Great Wall bricks were used in building homes, farms, or reservoirs. The northwestern Great Wall sections (e.g. in Gansu and Ningxia provinces) are likely to disappear in 20 years, due to desertification and change in human land use.  The Jiankou Section of the Great Wall, known for being steep and winding, enjoys the most appearances on Great Wall picture books and post cards.  The most famous section of the Great Wall — Badaling — has been visited by over 300 heads of state and VIPs from around the world. The first of which was Soviet statesman Klim Voroshilov in 1957. The Great Wall of China is the longest man-made structure in the world. 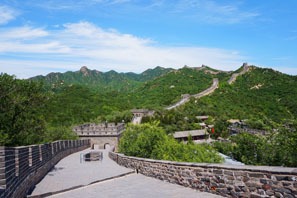 Glutinous rice played an important role when building the wall. It helped fix the bricks in place and bound the bricks together so tightly that weeds cannot grow in many parts. The Great Wall Marathon is held in October every year on Mutianyu Great Wall.  Badaling Great Wall was the first section of the wall to open for tourists.

The Paradise of Island: The Cook Island